The building is heated by a gas boiler plant and radiators of the heated water system, which keep the rooms warm and are mostly installed below windows. The radiator heating system is a subdivided vertical 2-pipe system. There is a mechanical injection/extraction ventilation system and a cooling system in the rooms.The solution of office floors is planned as flexible as possible. It is possible to arrange the premises into small offices or have one big room accommodating different companies. If necessary it is possible to divide the premises on different floors into one, two, three or four independent offices with divisible utilities and common rooms.

High and low current installations of the electric system are installed in the conformity to standards established to office premises and the lighting is regulated according to the average standard value of the lighting intensity. Offices are equipped with communications and computer network.

The access to the new building opens via the main entrance of the existing building. Separate entrances can be opened on the ground floor of the trading premises from Peterburi Road. The vertical movement inside the building is solved so that the new part of the building may be used via a separate main entrance and foyer. The building was designed so that the views at the Old Town, the sea and Ülemiste Lake opening from the existing building are preserved. The trapeze-shaped main plan of the building enables to see wonderful views from the majority of rooms.The façade is mostly made of adhesive brick imitation tiles, which stand out next to the surrounding sheet metal and glass objects and refers to historical industrial landscape. It is important to handle the building as a separate unit, which provides variety in the environment.

The new building has a strong architectural character, which enables the existing building to retain its monumental character as a single object. The high and low current installations in the building are installed in conformity to the standards of office rooms and the lighting is regulated according to the average standard value of light intensity. The office is supplied with communications and computer network.

There is a general injection and extraction ventilation in the building. The rooms are heated by water heated radiators; there is a cooling system in offices. A VRV system is used in the entire building. To decrease the cooling load of the premises, windows on the southern facade of the building are covered with sun protection glass.

The solution of the office floors is planned as flexible as possible. It is possible to create small offices on different floors or one big common area for several institutions. If necessary a floor may be designed as office premises with divisible utility and common rooms or into separate single, double, triple, etc. offices. A combination of different variants is possible. The vertical utility structure in the centre of the house unites the building into a compact entity. 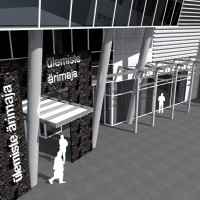 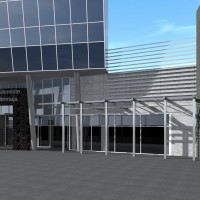 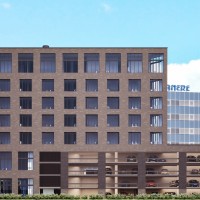 Our goal is to create a good environment for the performance of our work.